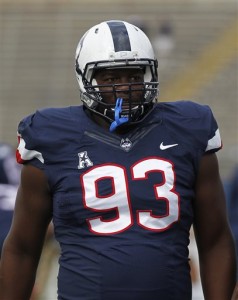 Connecticut defensive lineman Foley Fatukasi (93) stands on the sideline prior to an NCAA college football game against Navy, Saturday, Sept. 26, 2015, in East Hartford, Conn. Three years after Superstorm Sandy forced his family from their home, Connecticut’s Fatukasi has settled into a central part of the Huskies defensive line. (AP Photo/Stew Milne)

By PAT EATON-ROBB
UConn defensive lineman Foley Fatukasi understands better than most when his coach preaches about the power of working as a family to overcome adversity.


That’s a lesson the 304-pound sophomore defensive tackle says he began learning on Oct. 29, 2012, when Superstorm Sandy tore through his neighborhood in Far Rockaway, New York.

Fatukasi’s house was left uninhabitable, flooded with sewage-tainted water and left without electricity or heat. His high school also was severely damaged and forced to close for months.

“You get scared about who and what you are going to lose,” he said. “A lot of people lost their homes. In times of stress you find out who will be there for you, your family and your friends. In times like those, everybody loves each other.”

Neighbors and his teammates on the Beach Channel High School football team shared food, clothes —whatever someone needed, he said.

And despite the fact that their school had closed and many of players, including Fatukasi, had been forced from their homes, he and his teammates kept playing football.

They didn’t give up on each other, Fatukasi said. The team had made the city playoffs and was determined to play. They salvaged equipment from their flooded locker room and scraped together the rest through donations, including some from their opponents. They held a couple of practices at a nearby school that wasn’t as badly damaged.

Some teammates who had been displaced to other states came back to play in that game. Beach Channel lost, but Fatukasi said that wasn’t important.

“It was kind of like a therapeutic thing,” he said. “I could get my mind away from the stress a little bit, playing the sport I love.”

And there was a lot of stress. He, his parents and two younger brothers were homeless. They bounced around, staying with friends, family and for several months in a motel. He was bussed about an hour each way to a new school.

“It was hard, he and his two brothers all trying to do homework and finishing their assignments in that motel room,” said his mother, Ifedola. “But I told him, life has to move on. You have lots of potential in your life. Don’t let anything weigh you down. You just have to keep moving.”

Three years later, Ifedola Fatukasi says the family still has some financial struggles. But, they have worked hard and are back in their home. They take inspiration, she said, from watching Foley fulfill his dream of becoming a college football player.

“All of us, we were rocked, but our togetherness helped each other’s strength,” she said. “We have to give thanks to God for what happened.”

Fatukasi has become a key player on the UConn line. He played in 12 games a year ago and has 12 tackles, including six for losses, through four games this season. The Huskies, 2-10 a year ago, are 2-2 this year.

Senior defensive tackle Julian Campeni said Foley is the type of player who would do anything for a teammate and is helping turn the program around.

Head coach Bob Diaco said Fatukasi also has the size and may have the talent to play at the next level. And more than that, he has the perspective to be a successful human being, he said.

“He doesn’t have any blind spot in terms of what this life can bring and what it’s all about,” he said. “He’s got a raw, real outlook. His also a very giving, kind guy. If you need Foley, all he has to be is in earshot and he will help.”