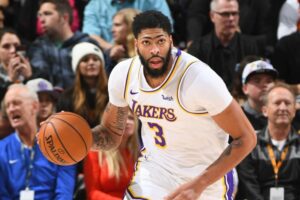 The endorsements are rolling in for Anthony Davis as Defensive Player of the Year, which feels a little hasty less than a week into December.

Head coach Frank Vogel stumped for Davis on Tuesday, and teammate LeBron James echoed the sentiment after the Los Angeles Lakers’ 121-96 road win over the Utah Jazz on Wednesday. To say we should consider the potential for bias from those sources is an understatement. Vogel and James (and surely, soon enough, the Lakers’ PR department) won’t be the last to advocate for a co-worker’s award-worthy play.

Maybe Davis will deserve DPOY several months from now, and maybe he won’t. What matters more is the impact he’s having on a surging Lakers team—on both ends. To be fair, AD’s presence on D was a key to the Lakers’ victory. Utah was hesitant around the cup all night, constantly aware of his looming presence. He blocked three shots but changed plenty more, helping to limit the Jazz to 34 points in the paint, well below their season average.

That shouldn’t be a surprise. Davis leads all high-volume rim protectors in defensive field-goal percentage allowed at the rim.

He was even a deterrent much farther away from the bucket. Just for posterity, the numbers through roughly a quarter of the season suggest AD is right in the mix for award consideration.

He trails Rudy Gobert, Joel Embiid and a few others in Defensive Player Impact Plus-Minus, and he ranks fifth among players with at least 600 minutes in Basketball Reference’s Defensive Box Plus/Minus. The Lakers’ performance on defense has been excellent, ranking fourth in the league (102.7 points allowed per 100 possessions). But it’s also true that they post a better defensive rating with AD off the floor than on.

He was also 9-of-11 from the field for an efficient 26 points against the Jazz, including a perfect 4-of-4 in the restricted area.

One of those four close-range makes was a little louder than the rest. Instead, Davis anchored them on both ends and was key to a 34-26 first-quarter blitz against what should have been a desperate Jazz team. Utah came in having lost four of the five games on its recent road trip, and several of those included brutal first-half deficits. If ever a team should have been motivated to summon a hot start, it was the Jazz on Wednesday.

But Davis and the Lakers iced them early and for the duration, winning their 10th consecutive road game.