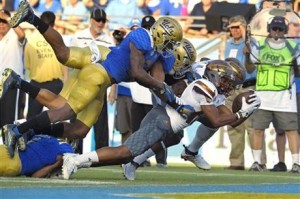 By DAN GREENSPAN
If absence makes the heart grow fonder, No. 20 UCLA will be pining over linebacker Myles Jack and cornerback Fabian Moreau for a long time.

Already coping with the absence of defensive lineman Eddie Vanderdoes following a season-ending knee injury in the opener, the Bruins’ defense has been a mess since also losing Moreau (foot) and Jack (knee) to injuries. Moreau and Jack were both going to be gone for the year, and Jack has since also decided to drop out.

“All we can do is move on,” defensive end Takkarist McKinley said. “We can’t sit and complain and be disappointed. We just got to find a way to be better as a unit.”

That is easier said than done after allowing 545 yards rushing in two Pac-12 games since Jack and Moreau got hurt.

UCLA (4-1, 1-1 Pac-12) was able to overcome its issues defending the run against Arizona thanks to timely red-zone stops and three takeaways, but couldn’t do it again versus desperate Arizona State. The Sun Devils piled up 192 yards on the ground, finishing off last weekend’s upset win with Kalen Ballage’s 23-yard touchdown run.

UCLA’s defense was on the field for 90 plays and 37:47 of game action, but McKinley said fatigue was no excuse for missed tackles and blown assignments.

“No matter how many times we’re out there, our job is to stop them,” McKinley said.

Arizona State was particularly effective using the zone-read. Not exactly known for his mobility, quarterback Mike Bercovici looked quite spry on an untouched 34-yard touchdown run up the middle of the UCLA defense. McKinley took the blame, saying he knew Bercovici was coming right at him and still didn’t make the play.

It was the kind of mistake that might not have happened if Vanderdoes, Jack and Moreau were on the field. UCLA was also without inside linebacker Jayon Brown due to a back injury, while corner Marcus Rios played only a handful of snaps after spending three nights in the hospital last week.

Rush linebacker Deon Hollins acknowledged the depleted defense has little margin for error, noting how the athletic and instinctive Jack would have been able to make up for a breakdown.

“Gaps and assignments have to be perfect because earlier in the year if they just happen to get past me, Eddie and Kenny (Clark), you had the best player in the nation on cleanup duty,” Hollins said.

With a bye week to work on its issues before a Thursday night game at Stanford, UCLA will quickly find out if its run defense has improved enough to get back into the Pac-12 South race. Cardinal running back Christian McCaffrey is averaging 159 yards rushing in three conference games, and Stanford would love nothing more than to replicate Arizona State’s time of possession advantage to wear out the Bruins’ defense.

McKinley has confidence UCLA can use the next few days to overcome the absence of its top three defenders and regroup.

“We just got to play ball,” McKinley said. “We’re all here on scholarship. We all know our plays and know what we are supposed to do. The season is still alive. Just got to fight on.”