No. 20 LSU wants history to repeat itself 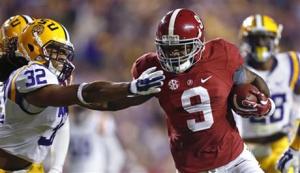 By BRYAN LAZARE
For the rest of this season, the 20th-ranked LSU Tigers wouldn’t mind seeing history repeat itself.

Unhappy as the Tigers are about losing each of their last three regular season meetings with Alabama, they’ve managed to respond well to their previous two defeats in the series.

LSU strung together three-game winning streaks after the 2012 and 2013 setbacks, and now aims to do the same to secure a fifth-straight double-digit victory total.

“We need an immediate bounce back,” senior center Elliott Porter said Monday. “We have our 48-hour rule. We have to get over it. It is my job as a senior to make sure the young guys get over things and get ready for the next one. It is a tough pill to swallow, but you have to swallow it.”

The Tigers (7-3, 3-3 Southeastern Conference) have little time to get over the heartbreaking defeat against Alabama. LSU will travel to play Saturday at Arkansas (4-5, 0-5), which is seeking to end a 17-game SEC losing streak.

Coach Les Miles said Monday he has no concern about his players’ mindset.

“There’s a deep breath in every one of us,” Miles said. “It’s that anxiety and that ugly feeling you get in your stomach when things don’t go exactly right. That’s the emotion you’ll find in our players. … We’re going to ache. We recognize, ‘coulda, woulda, shoulda.’ We recognize where we are.

“That’s going to be difficult to handle. But, they will go to the field and practice. They will get a little bit of sweat going. They will do the things they’re supposed to do. At the back end of practice, they will feel a little bit better,” Miles added. “By Tuesday, they will be all focused on Arkansas.”

On Monday morning, however, Miles was still revisiting the Alabama loss in a telephone conversation with SEC Coordinator of Football Officials Steve Shaw. Following the game, Miles appeared to be upset about an unsportsmanlike conduct penalty against guard Vadal Alexander late in the game.

With the score tied at 10, the penalty pushed the Tigers back from the Alabama 6 to the 21. Soon after, LSU had to settle for a 39-yard field goal by Colby Delahoussaye to take just a three-point advantage with 50 seconds to play.

Miles sounded mostly satisfied with his exchange with Shaw, saying he “did a great job explaining to me the mechanics and how they looked at things.”

“I appreciate very much the candidness with which he described each call,” Miles said, referring to what may have instigated Alexander’s penalized shove. “I’m very comfortable with how he saw it. What has to happen in making those calls is the official must see the whole play. He can’t make a partial call. It’s got to be the whole play. Upon review … I think that call could have been made in a different way.”

Now, LSU must turn its attention to Arkansas. The Tigers have won four of the last five games against the Razorbacks. However, three of the LSU victories came by a margin of seven points or less.

“This football team is made up of quality people and guys with character,” Miles said. “They will be fighters. We will try to improve as a team like always. We want to play ourselves into a (bowl) game of significance. That very next game of significance will be Arkansas in its stadium.”