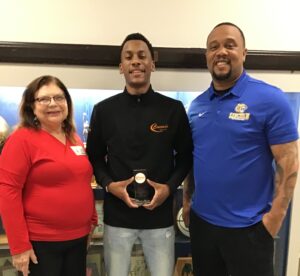 Lincoln Prep Academy Basketball Student-Athlete Jeremiah Randle Senior shooting guard 3-year starter will be joining the air force received the Leon M Harden Jr. Sportsmanship Award. The award is named after a man who displayed athleticism and sportsmanship /competitiveness and was a good teammate on the field and off the field. The award is picked by the respective coaches of each one of those basketball teams. Each Player received Crown Custom Crystal Award a $100.00 gift certificate and Cascade Sports Signature Apparel Piece along with a Leon M Harden Jr Scholarship Fund to be established at Lincoln. Head Lincoln Prep Academy Basketball Coach Ryan Glasgow, and Peggy Thoennes CEO, of Dollars For U. She has been in the fundraising game for over 30 years. Dollars For U is one of the major supporters of Cascade Sports high school sports programming.