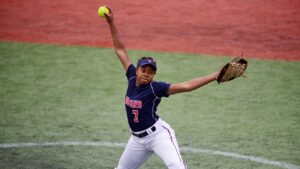 Q: When did you start playing softball?

A: I started playing competitive softball when I was eight years old.

A: During the 2018-19 year, the team was without a coach for about five months before Coach Tori Tyson (Howard Softball head coach) took over, which was challenging; however, we finished third overall at the Mid-Eastern Athletic Conference (MEAC) Championships. So, from not having a coach to nearly making the MEAC Title game was really an accomplishment for our team. Coach Tori was able to turn our program around and that moment was amazing!

Q: Why did you choose Howard?

A: I left my previous school, Florida A&M University (FAMU), while my sister was enrolled in Howard’s Occupational Therapy program. At the same time, my best friend played on HU’s softball team.

When I was choosing a school, I was interested in both Morgan State University and Howard. But I really liked D.C. and knew Howard was ranked among the nation’s best in academics and that was very important to me. So, I transferred to HU because of its academics and culture.

Q: What is your favorite part about Howard?

A: Howard has given me an opportunity for growth while turning me into the woman I am today. I understand my worth as an African-American woman. I transferred to HU where there are Black female professors. Before coming to Howard, I’d never been around so many Black powerful women, especially professors.

Q: What are you going to miss most about Howard?

Q: What has been your biggest accomplishment at Howard?

A: This season, I got the chance to contribute to my team’s success, which was very important to me. In my last game, I threw a shutout and we won 8-0. This was a fulfilling moment in my softball career because we won in front of our home fans cheering for us.

Q: What is the most special thing about your team? A: We’re one big family and I love my teammates. We have a connection, even outside of softball. In my opinion, it’s hard to find a group of 25 women who get along with each other. That’s a very special bond.

Q: What advice would you give to your younger teammates and future Bison?

A: Actually, I’m coming back to help next year’s team as an assistant pitching coach. I’ll be graduating in the fall, so I’ll stay the full academic year in D.C. and travel with the team.

I’m very appreciative that Coach Tori is giving me this opportunity to come back and help the team because I’ve always loved softball. I’m really looking forward to next year.

Q: What is your expectation for the team going forward?

A: I want to see the team continue to make strides because we were on the verge of being champions. I really want to bring the title back to The Mecca and I know we’re capable of achieving that.

Brooke Thomas was a two-year member of the softball team after transferring from Florida A&M. She chose HU over Morgan State because of academics and culture.

In December 2020, the Detroit native plans to graduate with a bachelor’s degree in political science and a minor in sports administration. During the 2020-21 academic year, she plans to help the team as an assistant pitching coach. Sponsored by Third and Long Foundation and Lee A. Tolbert Academy