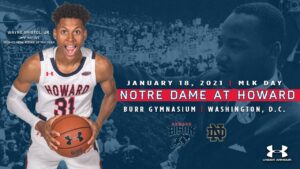 Howard Men’s Hoops Set to Host Notre Dame on MLK Day 2021 Bison take on Fighting Irish at The Burr; both programs collaborate with When We All Vote
(Photo Credit – Howard Athletics Media Relations)

Tipoff and game broadcast details will be announced at a later date.

The matchup features Notre Dame visiting a Historically Black College and University (HBCU) for the first time in program history.

“We are excited to host the University of Notre Dame men’s basketball team in what will certainly be a spirited competition that will energize the fans on both sides of the court,” said Howard University President Wayne A. I. Frederick. “As we witness the nation’s outcry for social justice and racial equality, this event will be a fitting demonstration of unity, collegiality, and sportsmanship.”

MLK Day is an American federal holiday, acknowledging the birthday of the chief spokesperson for nonviolent activism in the Civil Rights Movement, which protested racial discrimination in federal and state laws. In 1983, President Ronald Reagan signed the holiday into law and it was first observed three years later (January 20, 1986).

This will be the fourth time Howard honors Dr. King’s Celebration of Excellence by hosting non-conference contests with iconic, historical institutions. In the past two seasons, HU has greeted Ivy League perennials Harvard (2016 & 2019) and Yale (2020) to The Burr.

“We’ve made this a tradition, hosting these outstanding institutions on MLK Day,” said Howard Director of Athletics Kery Davis. “We thank Commissioner Dr. Dennis E. Thomas for giving us an opportunity to host Notre Dame during Mid-Eastern Athletic conference play. This is a great opportunity for us, and we’re excited to welcome Coach Mike Brey and the Fighting Irish to The Mecca.”

“We are honored to welcome Notre Dame to Howard University for our annual MLK Day game,” Blakeney stated. “Coach Mike Brey and I are brothers! We were both mentored by one of the best educators, Coach Morgan Wooten at DeMatha Catholic H.S., who considered himself a teacher first. We understand that this game is bigger than both universities and I feel that we have a social and civic responsibility to engage our programs in celebrating Dr. King’s birthday.”

Before next year’s showdown at The Hilltop, Howard and Notre Dame are excited to announce an initiative in partnership with When We All Vote (WWAV), a national, nonpartisan nonprofit that brings together citizens, institutions, brands, and organizations to increase participation in every election. Launched by Michelle Obama, the organization is committed to closing the race and age voting gap and empowering all eligible voters to cast their ballot by harnessing grassroots energy, establishing strategic partnerships, and implementing digital organizing strategies, with the ultimate goal of changing the culture around voting.

“We have been looking for the best way to fulfill our game contract with Howard and this seemed like the perfect fit,” Brey said. “As our program searched for the best way to remain active participants in the push for social change, a visit to one of our nation’s top HBCUs on Martin Luther King Jr. The day will provide an incredible educational experience for our student-athletes, coaches, support staff, and university.”

Before every practice, Coach Blakeney shares a quote with his team and one quote from Dr. King that is relevant during these challenging times, “Law and order exist for the purpose of establishing justice and when they fail in this purpose they become the dangerously structured dams that block the flow of social progress.”

“Give us the ballot,” Blakeney added. “And we will no longer have to worry the federal government about our basic rights. Being a coach means you’re a teacher and I’ve been given an incredible opportunity to teach, serve, lead, and give back while helping student-athletes achieve their full potential.”

President Ronald Reagan signed the holiday into law in 1983, and it was first observed three years later. At first, some states resisted observing the holiday as such, giving it alternative names or combining it with other holidays. It was officially observed in all 50 states for the first time in 2000.

ABOUT WHEN WE ALL VOTE

When We All Vote is a national, nonpartisan nonprofit that brings together citizens, institutions, brands, and organizations to increase participation in every election. Launched by Michelle Obama, the organization is committed to closing the race and age voting gap and empowering all eligible voters to cast their ballot by harnessing grassroots energy, establishing strategic partnerships, and implementing digital organizing strategies, with the ultimate goal of changing the culture around voting.

For more information, visit the Bison Athletics website at www.HUBison.com.