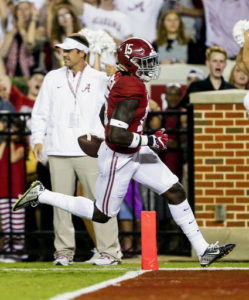 Alabama defensive back Ronnie Harrison (15) drops the ball as he crosses the goal line for a touchdown after a fumble recovery against Kentucky during the first half of an NCAA college football game, Saturday, Oct. 1, 2016, in Tuscaloosa, Ala. (AP Photo/Butch Dill)

By JOHN ZENOR
Rashaan Evans reached around Kentucky quarterback Stephen Johnson and ripped the ball from his grasp.


Alabama safety Ronnie Harrison scooped it up, juked one offensive player-turned-defender and raced 55 yards for yet another defensive touchdown for the top-ranked Crimson Tide, which then took control in Saturday night’s 34-6 win.

“When you run to the ball and you have good energy defensively, that’s when things happen,” said defensive end Jonathan Allen, Alabama’s sack leader. “We pride ourselves on running to the ball, not having any loafs or mental errors or missed tackles, and it’s starting to come to fruition.”

Indeed, the Tide ranks in the Top 10 in scoring, rushing and total defense. That’s nothing out of the norm.

Alabama players believe their defense stands out because of its aggressive opportunism. The Tide’s special teams and defense have accounted for 53 touchdowns in Nick Saban’s nine-plus seasons including a high of 10 during last year’s national championship run.

This one’s on pace to blow past that number.

The defense and special teams have accounted for nine TDs in the last seven games, dating back to the semifinal matchup with Michigan State. Alabama, which visits No. 16 Arkansas on Saturday night, has had at least one non-offensive TD in each game since.

The scoring streak has become a source of pride for the Tide, whose other big streak is 17 wins in a row.

“We harp on it all the time,” Harrison said. “We try to get a score every game on defense. We’re just waiting for someone to make a play.

“It’s kind of a thing right now, we’ve got to get one on defense every game.”

Evans, a reserve linebacker, and Harrison supplied the latest example.

“That’s what we work on — trying to strip the ball out — every day in practice, and that will be something that we can show the other players,” Saban said. “When you do it correctly, you have a chance to get the kind of consequences that you like and get the ball out.”

Linebacker Ryan Anderson had jarred the ball loose from Johnson earlier and recovered it himself. Evans had a simple take on his own big play.

“I was rushing and I just so happened to turn around and the quarterback was right there,” the former five-star recruit said. “I just tried to get the ball and that’s what happened.”

Alabama’s five defensive touchdowns and seven non-offensive TDs both lead the nation. Three of them came against Mississippi in the only game where the Tide was tested.

Here’s a breakdown of Alabama’s touchdowns from defense and special teams in each game this season:

—Kentucky: Harrison raced down the left sideline to give Alabama a 17-3 lead after juking one Wildcats player. And now his teammates can quit giving him grief.

“The guys on the team were messing with me like I was the only DB who hadn’t scored a touchdown, so it was good to get one,” he said.